The first weekend of August gets called many things, depending on where you live. In Toronto, they call it Simcoe Day after John Graves Simcoe, the first Governor of what was then known as Upper Canada. Thanks to AMC’s Turn, people might wonder why a city would celebrate a sociopath. (People read a history book! Preferably a good one!) Winnipeg decided not go back that far and named our long-weekend Monday, Terry Fox Day. (Fox was born in Winnipeg.) This year’s long weekend saw my city play host the 50th Canada Summer Games, a showcase of athletes and often the starting point for future Olympians. 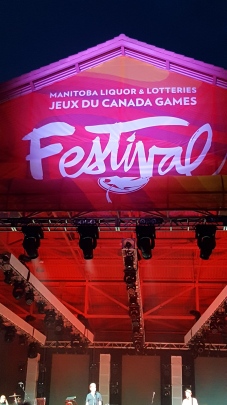 The games also have some cultural events at The Forks, with yesterday’s line up featuring local artists as part of Manitoba Day. A friend of mine invited me out, and I decided to throw caution to the wind for a good time. (Those household projects can happen later, I thought for the billionth time.) We arrived just in time for Royal Canoe with its atmospheric sound, thanks to an elaborate synth set up, and a lead singer with two (!) mics. (One was for a reverb-like sound in his vocals.)

The Crash Test Dummies came next with the Winnipeg Symphony Orchestra backing them up. While people remember the ‘money song.’ as Brad Roberts called Superman’s Song, I sang along with Peter Pumpkinhead, a song originally done by XTC and featured Ellen Reid on Vocals. For a brief moment, I felt 25 again as I bopped to the beat and sang along.

However, I felt 47 the next morning getting to sleep late and getting up for work after a long weekend. There’s a reason I don’t do too many of these night outs, I don’t have the stamina anymore to stay up late, then go to work ready to go. I maintain a state of perkiness, but it speaks to the power of the drug called caffeine. However, for those not residents of Winnipeg, below are two videos from each act.

First, Royal Canoe, Featuring Begonia (she was terrific) with the track Fussin’. The video features Winnipeg as a supporting character to the band, and many people, on bikes, pedaling around late at night.

The party continues this week with both the main stage (pictured) and a satellite one to fill in the gaps. Something tells me Friday will turn into one big, prairie kitchen party.